The ultimate success of any potter who fires with wood, is the preparation and storage of properly split and well-dried wood. It is a time consuming and labor intensive task that I feel far outweighs the effort.

Currently, I get my clay from Indiana and process it here at the pottery. Blunging is a process of adding water to dry clay and mixing it into a creamy solution that is then pumped into troughs or drying beds. It is left there for approximately three weeks, slowly drying to a state where it can be worked on a wheel. Approximately three tons is needed per cycle to fill the kiln.

It takes nearly two months to make a sufficient number of pots to fill the kiln. This lengthy cycle gives me a great period of concentrated time at the wheel. Each day involves making pots, along with glazing and decorating of pots of those made the previous day. As the workshop is filled with the greenware, there is increased anticipation as we approach the firing.

The “noborigama” or chamber kiln, is a distant relative of kilns developed in Japan nearly one thousand years ago. My kiln was built during the summer of 1999 with the help of Hallie Hite and Nate Evans of Allamakee Pottery in northeastern Iowa and fired for the first time that September. Nearly ten thousand recycled bricks went into the construction of the kiln. Three chambers make up the kiln, each attached to the next by flues, each producing distinctive styles of work: natural fly ash glaze in the first chamber, decorated glazed ware in the second, and salt-glazed pots in the third. 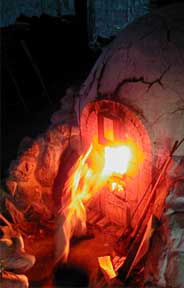 Firings take place three times a year and are the culmination of three months’ work. Life at the pottery centers on the successful packing and firing of the kiln. The first week of the firing cycle begins with placing nearly fifteen hundred pots in the three chambers of the kiln.

Once the kiln is packed, a small fire or candle is lit in the fire box and tended for two days to insure that the pots are thoroughly dry for the firing. For the next three days, a crew of four takes six-hour shifts to bring the kiln up to a temperature of 2350 degrees Fahrenheit, burning nearly seven cords of slab wood in the process. As the temperature rises, the kiln seems to come alive with a voracious appetite for wood. To insure that the temperature rises properly, great care and attention are necessary not to over- or under-stoke the fire. Once the first chamber is brought to top temperature, stoking ceases in that chamber and commences in the second, which takes nearly twelve hours to fire. Upon the completion of the second chamber the process is repeated in the third. With firing complete, the kiln is “clammed” or sealed and left to cool. After one week of eager anticipation, the doors of the kiln are opened to disclose the end result of four months’ work. This is a time for reflection, as each pot discloses information that can be applied to the next production cycle.